The Property and Evidence Division's main objective is to maintain and ensure the integrity of those items needed as evidence for judicial purposes. It is our hope to securely store all items and reunite owners with their property.

Property and evidence are stored at the Blaine Police Department. Questions regarding lost, found, recovered and releasable property may be directed to the Property/Evidence Technician at 763-785-6197.

Recovered property and evidence held by the police are stored at the Blaine Police Department. No property is releasable until 90 days after sentencing. If the property taken was not needed for court, you must talk to the officer or detective in charge of your case to determine if the item is releasable to you.

Property Room hours are Monday through Friday, 7AM to 3:30PM.

All items stored at the Blaine Police Department must be claimed in person during the Evidence Technician's normal working hours. No evidence is mailed.

A representative may also be designated to pick up your property but must present a notarized letter verifying representation. You will need your case number and a valid I.D. card or your valid driver's license to get your property returned.

Evidence is locked in a secured area so you must call ahead in order to retrieve your property.

In order for a firearm to be released to you from the custody of the Blaine Police Department, a criminal history check must be completed. You will need to present a valid Minnesota driver's license or valid Minnesota state identification card.

Bicycles recovered are compared with descriptions of bicycles reported to the Blaine Police Department as lost or stolen. If a match is found, the owner of the bicycle is contacted.

Call the Community Services Department to inquire about found bicycles. A valid state ID card or driver's license and proof of ownership will be required for a bicycle to be released to you. Proof of ownership includes a receipt of purchase or a serial or registration number.

Unclaimed bicycles are kept for 60 days and then are sold at the Police Auction. 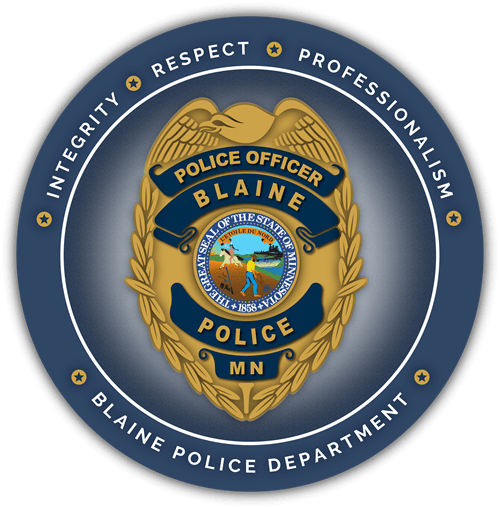